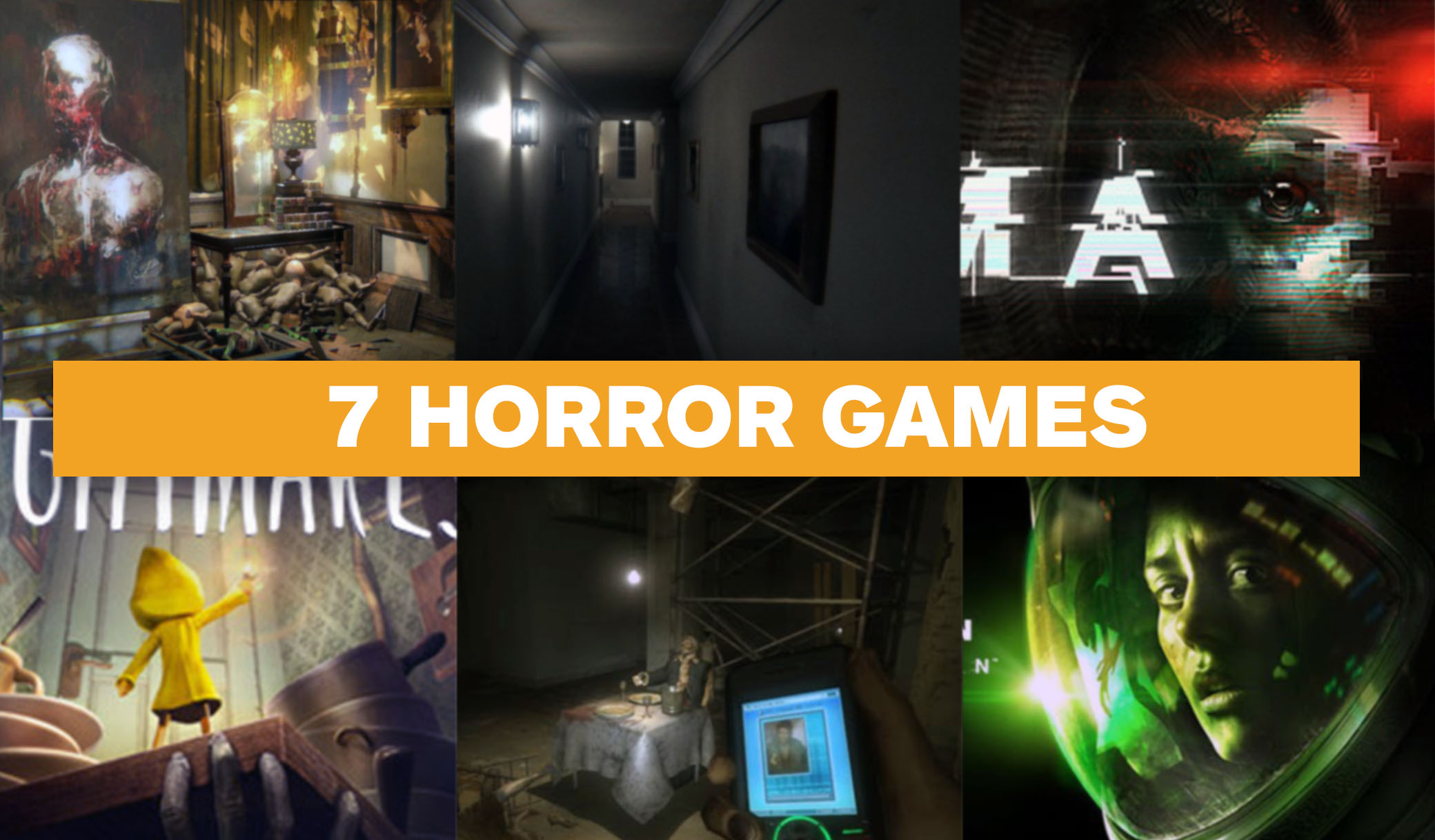 It’s finally that spooky time of year! So, to celebrate we have two spooky related posts for this week, starting off with a list of my personal favourite horror games! Small disclaimer, I’m not hugely into horror games so I haven’t played too many. Therefore, some big favorites people always mention, aren’t in this list. This is because I’m only including ones I have played or watched an entire playthrough of.

Even though this game perhaps isn’t too conventionally scary, the art style, music and themes definitely gave it an eerie feel overall. In this puzzle-platformer game, you play as a child named Six, whose face is covered by the large yellow hood of her raincoat. You must jump, run and hide your way through areas, having to avoid an array of different enemies. The environments, and ghastly character designs made for some very creepy moments. I remember freaking out during a boss battle with this character whose arms would stretch to terrifyingly long lengths.This short game, is definitely worth a play if you haven’t already.

So, I’m starting this off by saying I will not be including Outlast 2 on this list, as I found it very boring. The first Outlast however, definitely makes the list. The first Outlast was honestly quite unsettling right from the beginning. It’s a first-person game, set at the Mount Massive Asylum, where there have been allegations of experiments being performed on humans.

Your character goes in the middle of the night to investigate, armed only with a video camera. The camera also functions as the only way to see in the dark, however the camera relies on batteries which our character (in a stroke of genius) decided not to bring spares of. Luckily, there are batteries scattered about the Asylum. So, as well as running from the terrifying inmates, you could lose your ability to see at any second… brilliant!? The story is quite interesting, and it has a few jump scares, but overall, it’s a pretty fun horror experience.

SOMA is a first-person survival horror game created by the same team that did the Amnesia games. I sadly have never really played any of the Amnesia games, however I really did enjoy SOMA. You play as a character named Simon in the year 2015 who undergoes an experimental brain scan, before randomly waking up on an underwater base in the year 2104, with no memory about how he got there. You must maneuver your way through the abandoned base, being chased by various types of monsters.  The location is super eerie, and the tone and sound design really adds an extra layer of unsettlement. The story as well had some awesome twists and turns – and I’m still not over that ending!

If you thought The Alien movies were scary, then this game will be your nightmare. In this first-person survival horror game, you assume the role of Ellen Ripley’s daughter Amanda, who just like her mother, seems to have many runs ins with a resident Xenomorph. Like the last 3 games on the list, you mainly must run and hide from bad guys, and maneuver your way through a hostile environment, in Amanda’s case, to find her friends and get them safely off the ship they’re stranded on.

This game looks and feels awesome, with the threat of the terrifying Xenomorph, or the creepy androids, constantly in the back of your mind. Another aspect that adds to the scariness of this game, is the fact that you can only manually save your game by finding save stations. This makes every move even more terrifying, knowing how far back you might have to go if you die. This game is well worth a play this creepy season.

This is a shorter game than the last few in the list, but just as creepy. In this first-person game, you play as a struggling artist, whose paintings begin to haunt him. I found that I gravitated towards this game more than the previous ones, just because I am more of a fan of psychological horror than just gory or sci-fi horror. As you walk around the big manor your character lives in, you try to uncover the reason behind all the strange goings on and why all the paintings you try to make turn into terrifying monstrosities.

There are also three possible endings of this game, and of course I managed to get the sadder of the three. An awesome short spooky horror game that’s well worth a play if you haven’t already. Or even a replay if you haven’t seen the other endings!

Full disclosure, this is the only game on this list I myself haven’t played, but I have watched a full playthrough and that was more than enough for me. The saddest thing about P.T. (standing for playable trailer), was that the game that it was meant to become (Silent Hills), will probably never be. This is also the only game on this list that isn’t on PC. But technically now it’s not on anything anymore, so I think I can get away with it.

The reason why it’s so high up on my list, however, is that even though I never actually played it, my gosh do I still remember it!

You play as an unknown character in first person, stuck in a time loop going around the same hallway again and again. All the while, a terrifying ghost is stalking you and the hallway gets creepier and creepier each time. And boy were some of the loops REALLY  creepy! I can honestly still hear that creaking light swaying sound effect, the wailing baby, the radio – it was honestly that terrifying! Even though you can’t officially play this anymore, if you want to get spooked, jump on YouTube and watch a playthrough. You won’t sleep for weeks!

While I agree, many games on this list are scarier, this is still one of my favourite horror games by a mile. As I mentioned before, I much prefer psychological horror than just plain jump-scary or gory horror, and this game (and its equally good sequel) has that in spades. You play an FBI forensic agent named Ethan Thomas, who’s been tasked with tracking down a serial killer who seems to only murder other serial killers. This game is just everything I look for in a horror game. An intriguing plot with lots of twits and turns, a mystery to solve, and some truly horrifying stuff.

The areas you visit are creepy: such as an abandoned department store, complete with mannequins which move only when you’re not looking at them (think Weeping Angels), and a dark countryside landscape with only burning planks of wood for light. Additionally, the audio design really adds a level of eeriness. The amount of times I got jump scared by a screaming enemy charging at me out of nowhere was countless.

This game also doesn’t have much of the “run and hide” mechanic, like some of the others do. You carry a gun for most of the game, and if you run out of bullets being able to pick up various environmental items to use as melee weapons. But to me, that’s the mark of a good horror game. You’re armed, but you’re still terrified! This game is a severely overlooked horror game, and if you haven’t played it, give it a shot – if at least just play that mannequin level! You’ll never look at mannequins the same way again I promise!

So, what about your favourite horror games?

Those were my 7 favourite horror games, but what do you think we should check out this Halloween? Let us know in the comments below! 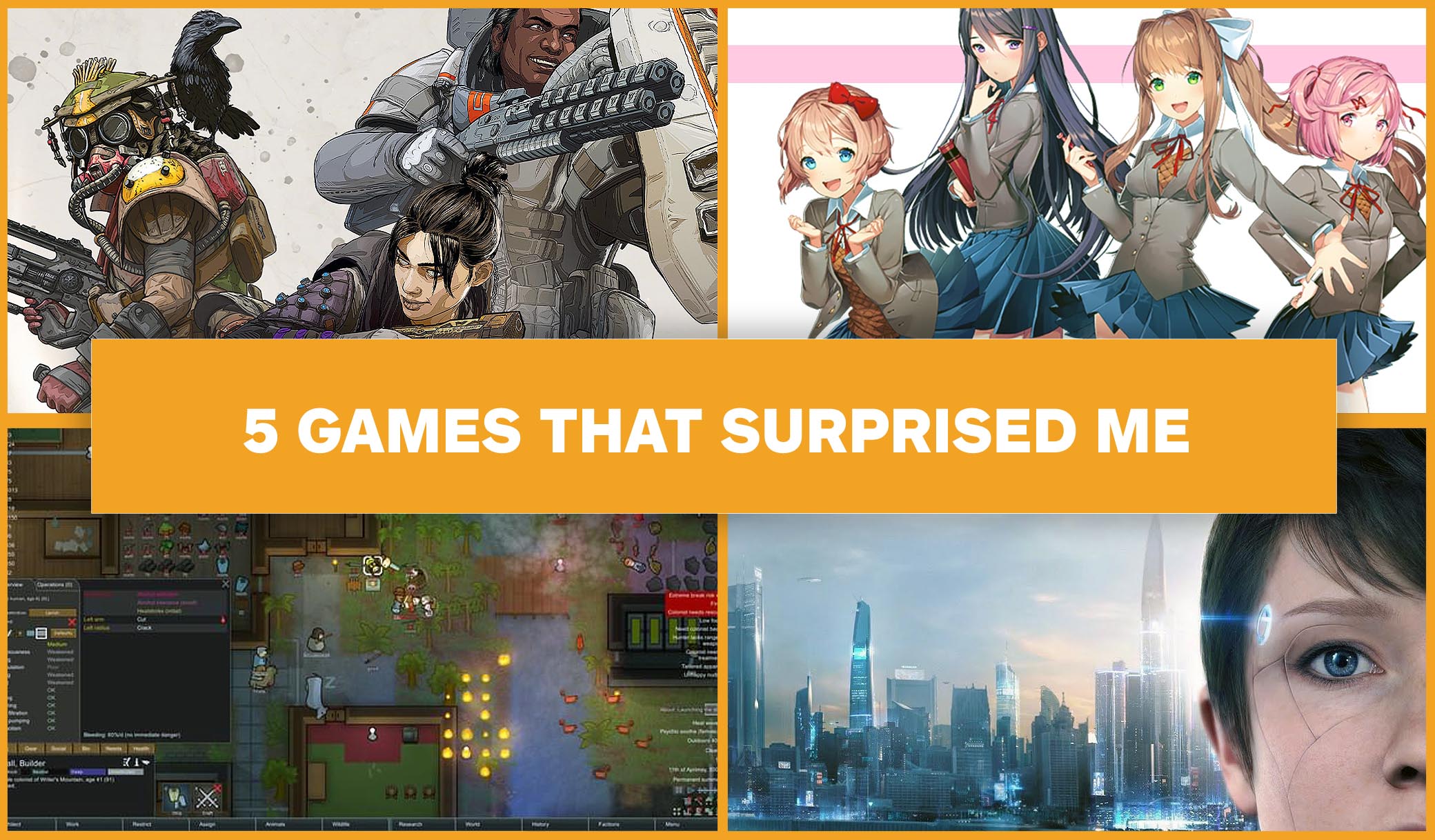 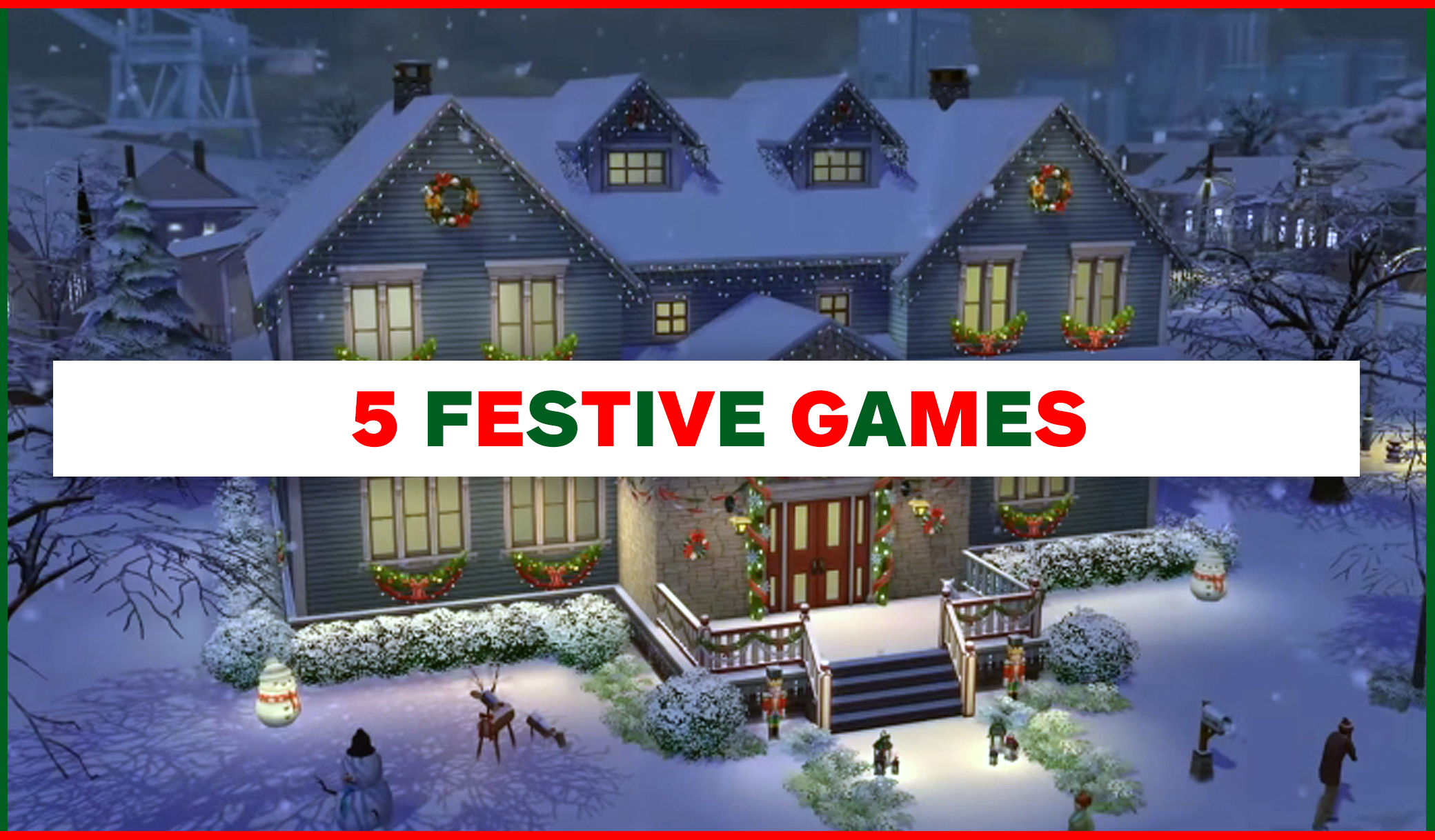 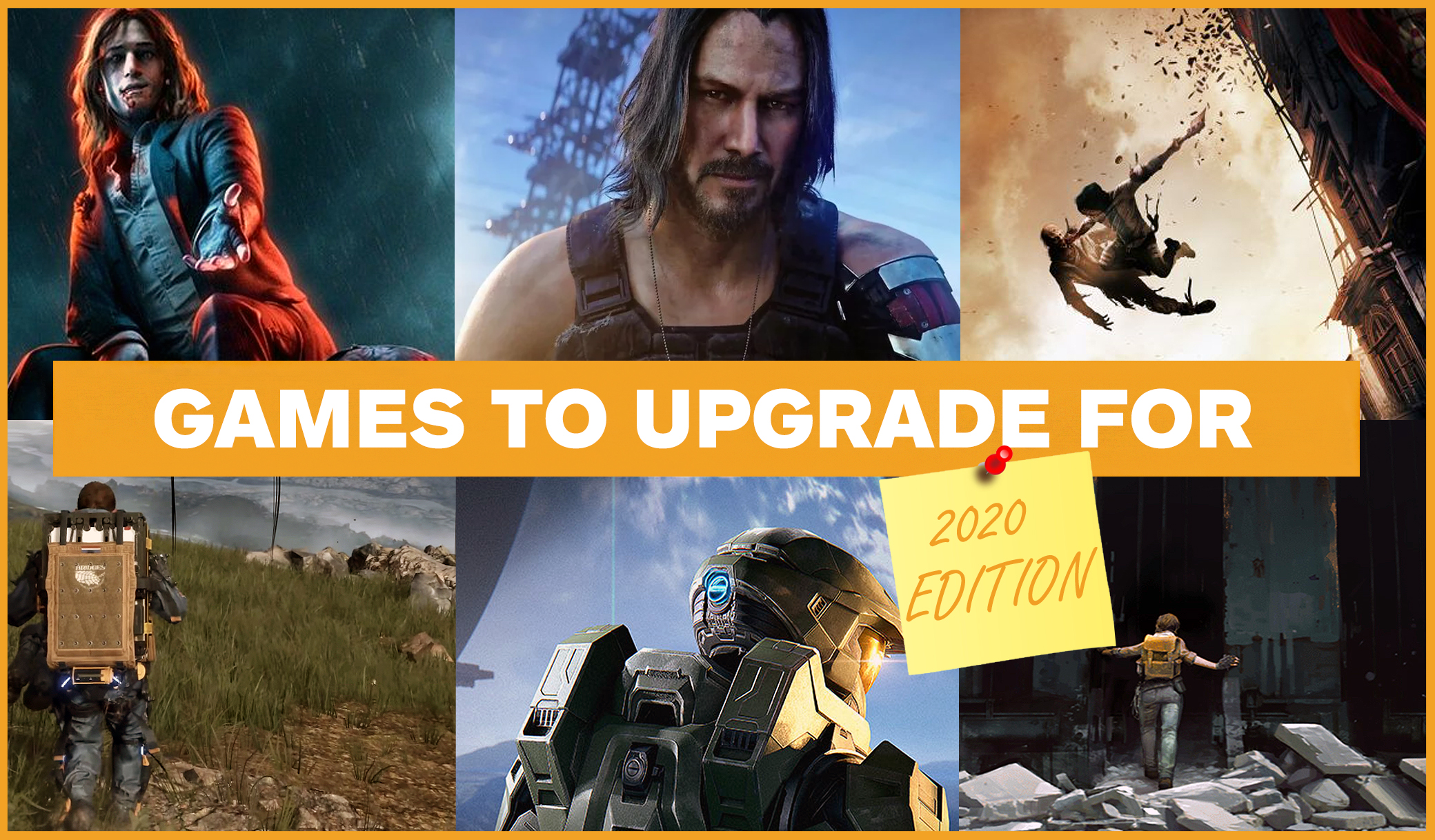